You know how it is when you're almost asleep, and you think to yourself "Oh, I just know I'm going to dream of happy things - of walks in the park, picnics on the beach, making love under a full moon". And then when you wake up, you realize your dreams were of awkward conversations with George W. Bush and his friends in an untidy college dorm room, and having to upload your school record to a centralized computing system so they can assess your suitability for admission but the instructions don't make sense, even though you're holding your perfect record in your hands - see, it's this sesame seed cake with a full covering of nuts on top which shows you got straight A's, but it's crumbling in your hands, and then you hear that the house you used to live in has suffered a terrible fire, so you go back to visit and the wealthy Indian gentleman who lives there now remembers you, but you don't remember him, and...

(I blame the cake bit on Les' "Top Tranny Vegan Chef" video, by the way.)

Okay, maybe you don't know how it is! But I'm sure you can relate to the feeling of distress and panic even though the dreams make no sense whatsoever.

In my waking life (that's the real one,right?) I spent yesterday afternoon baking myself a large Shepherd's Pie. Purists out there might argue and say it's a Cottage Pie because it uses beef instead of lamb. To them I say "You try finding ground lamb on sale around here!" Shepherd's Pie is possibly my most favorite food of all time, and unless I want to drive many miles and pay through the nose for a meal at an "authentic" Irish pub, I have to make it myself. This time I went large, in order to have leftover portions for my lunches over the next week.

I posted photos and twittered about this exciting event in my life as it happened. My friend Erin even opened a Facebook chat with me just to talk about it, and ended up being inspired to hold a potluck party at her new home when she moves in a couple of weeks. I guess I'll be cooking again when that happens! Another friend, Laura, asked me to share the recipe with her after seeing the photo of the finished product.

So, by request, here's the recipe I used for last night's meal. Bear in mind that I never follow the exact same recipe twice, and that this is probably underseasoned for most American palettes. You can add more salt, pepper, herbs, and even tomato paste if your taste buds need to be tingled more than mine.

All quantities are approximate. Don't blame me if I guessed wrong!

Cook the beef in a large non-stick pan until it is browned all through. Drain off the fat and then place in a large (9" x 15") ovenproof dish. Make sure the beef is arranged in a level layer. Place the green beans in a thin layer on top of the beef.

Cut the potatoes into 1/2" cubes and place in a saucepan. Cover with cold water. Bring to a boil, and simmer for 15 minutes. Drain. Add the milk, butter and half the salt and pepper. Mash thoroughly.

Prepare the gravy according to the packet instructions. Add the remainder of the salt and pepper, celery salt, garlic powder, onions and seasoning. Pour over the beef. Add up to an additional 1/2 cup of water for extra juiciness.

Spoon the mashed potato on top of the beef and green beans, and smooth it out to form a layer reaching to the sides of the dish. Take a fork and drag it across the entire surface of the potato to form thin grooves (the "plowed field" effect). Make grooves perpendicular to the first set, leaving two inches of spacing between each row this time (see photo above).

Bake in the oven at 375°F for 25 minutes. Finish off by broiling for 5 minutes, to brown the top of the potato. (If you're a cheese person, you can sprinkle some grated cheese on the top before broiling.)

6.SOAP OPERA NAME:(middle name, town where you were born)
None Brighton (Told you this wouldn't work)

11.YOUR GOTH NAME:(black, and the name of one of your pets)
Black Gizmo 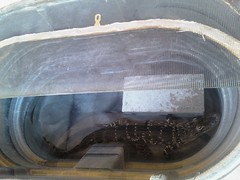 The fine fellow in this photo is a 4-5 year old alligator. No, he's not native to the Sonoran Desert. He was found in a Rubbermaid container, in the parking lot at work, early this morning by one of our security staff. Whoever left him there had thrown a handful of hotdogs in with him, and then just driven off. Our herpetology staff hastily took care of the poor, scared little guy and found him a larger tub to sit in, in the shade of their building, complete with securely padlocked lid.

We went over to pay him a visit after lunch. Bill had just finished up a 'Live and (sort of) On the Loose' presentation and was happy to open the lid for us and talk about alligators in general. Turns out he was quite excited - it was the first time he'd got to handle an alligator since he started working at the museum seventeen years, although previously he'd worked with them at the Philadelphia Zoo. We'll be shipping the gator off to a dedicated rescue facility in Phoenix soon, although Bill did say he'd love to take him home. I guess he felt his wife wouldn't be receptive to the new family member.

Bill pointed out that the tail was quite badly injured - chewed almost down to the bone. It's probable that the alligator had been housed with turtles who had done this to him. Luckily, the wound was clean and looked like it would heal just fine. We also learned that in order to sex a gator, you have to put your hand inside the cloaca, and feel the shape of whatever's in there. At just over three foot long, this youngster is too small for any of the herpetologists to be able to do that, so my apologies if I've been using the wrong pronouns for him! Hopefully he'll forgive me.

What with the inauguration this morning, streamed live into our theater for the benefit of staff, and a long lunch with my colleague Gareth, his sister and mother, the day went by very quickly. (See a couple more photos at Flickr).

This is how I feel today.

Also, Right Brain and Left Brain Inventory. I think I only have half a brain. 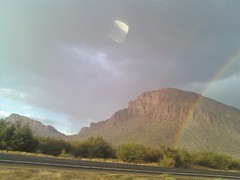 Originally uploaded by khyri
It's raining, but there's a rainbow.

(Uploaded directly from my phone)

Surely someone should have caught this typo?

"If you look historically, the Bible has reference to Unix, which were probably early transsexuals."

(Edit: The original TVGuide article does not contain this error. I wonder if the Seattle P-I had someone read the article to one of their staff members...)

I'll let the more eloquent write about how much this election result means to us all. I just wanted to share an image that says everything:

And follow that up with a video from The Onion.
Sequoia Voting Systems was one of our clients when we ran a web development company in California a few years ago. We redesigned their web site to be accessible to people with disabilities. I remember the president-elect, DRE 700, well. ;-)

Haven't done one of these for a while. From

What is your salad dressing of choice? -- Usually no dressing, though I'll take Ranch if I have to.

What is your favorite sit-down restaurant? -- Ruth's Chris though it's been a while since I've had the money (or the rich friends) to go there.

What food could you eat every day for two weeks and not get sick of? -- Oh, lots of foods. Pot pie, Boston Market brand of frozen Turkey Medallions, Hamburger Helper, Mint ice cream... I don't crave variety at all.

What are your pizza toppings of choice? -- Mushrooms, tomatoes, bacon.

What do you like to put on your toast? -- Butter and salt.

What is your wallpaper on your computer? -- These clouds are my wallpaper on all my home and work computers, and both of my phone displays!

How many televisions are in your house? -- I think there's three, although only one is connected up right now.

What color cell phone do you have? -- Burgundy.

Are you right-handed or left-handed? -- Right.

Have you ever had anything removed from your body? -- Yes, three weeks ago my left ovary was removed. I've also had two teeth out.

What is the last heavy item you lifted? -- Flagstones.

Have you ever been knocked unconscious? -- No.

If it were possible, would you want to know the day you were going to die? -- No way.

If you could change your name, what would you change it to? -- Something beginning with R. And probably gender-neutral.

How many pairs of flip flops do you own? -- One.

Last time you had a run-in with the cops? -- Speeding on the 91, just south of Fullerton, CA. They said I was doing 75 m.p.h. but I'm skeptical as the car I was driving was barely capable of such a speed, and I had a husband in the passenger seat, and three heavy dogs in the back at the time. I went to Comedy Traffic School.

What do you want to be when you grow up? -- I don't want to grow up any more! I'd like to be who I am right now, at least until I retire.

Last person you talked to? -- Stephanie, as I was leaving work on Friday.

Missing someone? -- Hm, yes, I am. Interesting.

Worrying about? -- Finances, but not too much.

Carrie Lowery, of the 'My Cool Job' blog, made a virtual visit to Arizona yesterday. I documented her fun trip, as you can see above. I hope she makes it out here for real one day.

In other news... hm. That's about it. My life is astonishingly quiet right now. 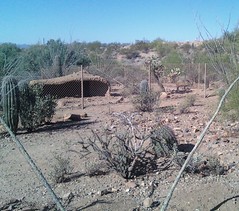 javelina behind chainlink
Originally uploaded by khyri
The desert loop trail has only just reopened since the javelina bite incident several months ago, and the wire mesh barrier is still being replaced. Meanwhile, the javelina are in a temporary chainlink fence enclosure.

They haven't changed the signage which you can see on my flicker page.

I'm starting a new work project to convert our docent tracking system's front end from Microsoft Access to being web-based, using HTML/Javascript/PHP. The data was always in a MySQL database, so no conversion required there. I'm looking forward to it. It's quite a challenge to keep the look and functionality exactly the same. We're hoping to roll it out without anyone noticing the difference. There's some interesting features, like having HUGE arrow buttons next to select boxes, because the built-in scroll arrows are too small for many of our docents to be able to use. And did I mention the HUGE fonts?

In other news ... I'm really sleepy. I can't do late nights any more.